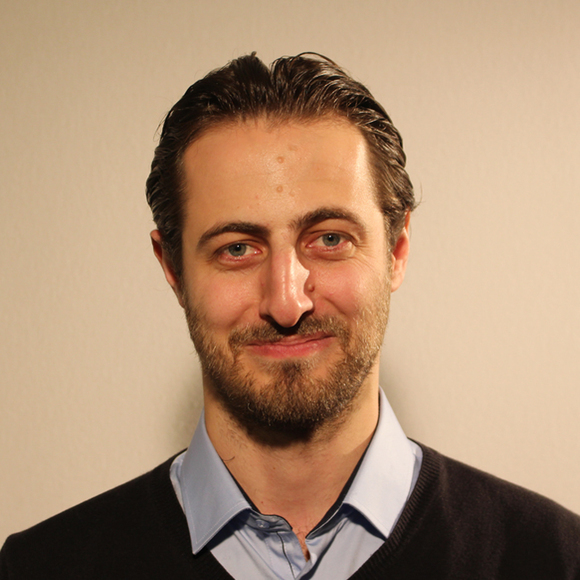 He loves sports; he goes rock climbing and plays both football and basketball. He also has a passion for Africa and Senegal which is reflected in his involvement in the organisation “Empire des Enfants”. Above all, Mathieu Chavanne is curious and is eager to learn and, more importantly, to do. He has the ideal profile for promoting AMP Visual TV’s new offers.

Currently, Mathieu travels quite often between Studio 128, Gennevilliers, the Smart Studio at the Palais des Congrès de Paris and the Media Center located on Rue Cauchy in the 15th arrondissement. This is normal for him. He is a bit of a nomad. This nomadic lifestyle is in line with his job responsibilities. While he is part of the sales department, he has learned over time and through experience to expand his scope into technology and production.

Clearly, he likes to work a little “outside of the box”. Admittedly, Mathieu is not purely into broadcasting. His CV clearly states the following: “I went to an engineering school that was highly specialised in computer science, but I decided quite quickly that I wanted to enter the professional world, so I started an internship with a multimedia content publisher specialised in sports. It was and still is one of my greatest passions. There I discovered the world of audiovisual and video editing.”

The publisher in question was Sporever, the company that former France2 journalist Patrick Chêne decided to found in the 2000s taking a gamble on digital technology. “And so, I started there as an intern in video editing and ultimately continued working for them as a contractor in video editing while also pursuing my studies. They then assigned me to the technical side of post-production: supervising the editors, graphic designers and technicians as well as hiring them and drawing up their schedules and so on...”

Dropping out of school was out of the question. So, he did what it took to obtain his engineering degree before joining the company that became Média 365. One thing led to another, and he took on responsibilities in creating the sports news channel for Orange (Orange Sports Infos) and then the Sport 365 television channel managing and running all the company’s productions (e.g. managing internal teams and contractors and implementing projects in France and abroad).

He worked on the Smart Studio, a new in-house facility providing a small turnkey automated TV studio for digital and business use.
“We set the sales prices and I mainly worked on creating initial quotes, mailings to search for our first customers and setting up our first film shoots.” This new innovative product that was developed at the Studios in Boulogne has since been moved to the Palais de Congrès (Porte Maillot). This is an opportunity to further develop it alongside institutions and companies - or what we call “corporate” in television companies. It is true that this is a different way of thinking and producing: “We are working with customers who don’t necessarily understand all aspects of the audiovisual industry. They want to make a show, and they know more or less what they want to talk about, but we have to co-create the show with them.

So, you have to spend time talking to them to make sure you understand what they want to do. Since we are on a budget that is clearly quite different from that of a television programme, we operate with a limited number of employees who are very versatile. Naturally, I also fall under this description by handling commercial and production assignments and sometimes even helping out with the technical side of things.”

On the move again

Just a year after his arrival, Mathieu learned that he was going to change companies once again. He approached this new era with anticipation and enthusiasm since he felt that AMP Visual TV wanted to develop the concept by adding it to a well-established and effective digital offer. As a result, he joined the Media Center team in November, and the Smart Studio was to be moved from the Palais des Congrès to the 15th arrondissement in June. “While Porte Maillot was a great location, the decision is economically sound. Moving over there makes sense since most of our customers come from the west of Paris.” Mathieu always approaches changes as exciting new challenges. It is clearly in his nature.

What does he hope for in the future? “That everyone at AMP Visual TV will one day work at the same location. It’s always nicer to be able to greet your colleagues and get to know them better.”

A natural desire to always maintain a little nomadism to keep in contact with everyone.

Doubts ? Questions ? Projects ? No need to hesitate. We are here to assist you !